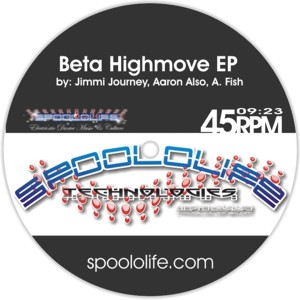 The Beta Highmove EP, SPOOLOLIFE0001 on Spoololife Technologies, is a masterful choon produced by Jimmi Journey, Aaron Also, and A. Fish, and released on July 4, 2007, launching the label into the digital download era with one of the largest independent dance music download stores in the world.

With over 1 million listeners, Spoololife Radio is of the world's longest running underground EDM stations on TuneIn. The 24/7/365 broadcast features sessions by Jimmi Journey, underground DJ's from many of his favorite crews and labels, plus global shows by Perfecto's Liam Shachar and 925 Music's Miss Nine. Listen from you computer or download the free TuneIn app from iTunes or Google Play.

See who IS or WAS playing on Spoololife Radio through the session history below.

Jimmi's sessions of house and techno—on two or three Technics turntables—are everything you expect from an underground rave DJ devoted to the craft since before the turn of the millennium.

On the wheels of steel, Jimmi weaves housy techno and techy house grooves from an unexpectedly diverse selection of wax. As founder of the Spoololife CREW, he passionately promotes massives and underground rave culture.

KIKWEAR Back In ACTION Tour

KIKWEAR's flagship "Phat Pants" took the underground rave scene by storm in the mid 90s, but my endorsement and promotion of KIKWEAR is a testament to its grassroots outreach to Electronic Dance Music culture nation-wide. Aboard the KIKWEAR "Back IN ACTION TOUR," sweeping the United States in 2013, I was honored to promote KIKWEAR, Spoololife, and Dance Mania with two tour stops in the midwest.

A rave officially endorsed by the American Cancer Society's "Relay for Life," and event on the KIKWEAR "Back in Action" tour, RAVESTRONG was a fundraising success at Bloomington Indiana's "Little 500" weekend.

Unlocking the Groove by Mark Butler

BACARDI invited me aboard the “RED HOT ROAD TRIP” in 2001. As a member of the crew I enjoyed performing peak-hour sessions of underground house and techno on the ones and twos. In its iconic "Red Hot" tour bus, the nightlife giant toured 24 cities across the U.S. seeking the #1 party town.

Headlining George Acosta, DJ CRAZE, Doc Martin, Micro, and Nigel Richards, thousands flocked to CatalyticSoul’s massive weekend festival “Underground Sound” in 2005, so it was an honor to perform at “Underground Sound 2″ with Electric Skychurch, Infected Mushroom, John B., and Woody McBride in 2006.

The view from Movement Music Festival's main stage is always breathtaking but, as an underground rave deejay and promoter invited to work alongside Paxahau and Canning Communications, the opportunity to preserve the Detroit Electronic Music Festival (DEMF) legacy is absolutely stellar, and I encourage you to make the journey to Detroit this year.

I accepted residency at downtown Indianapolis' ICE Lounge in 2006, taking the decks at "Entice" Thursdays and "Posh" Wednesday's alongside Chicago legend Rees Urban, Indy's own Slater Hogan, and an array of deejays from throughout the region.

It feels like just yesterday when I performed at Toymaker Music’s “Barnyard Boogie,” one of the most notorious underground raves in central United States. Virtually every dedicated underground electronic music deejay in the region has performed at one of its seemingly countless incarnations, I'm humbled to have performed at Barnyard Boogie 5 in 2006... 'Til the cows come home!

Send your request for bookings, press, or general contact in less than a minute!

Underground raves since before the turn of the millennium.